Sometimes men wear short shorts, it's a fact of life and there's nothing wrong with that. Sure, it's a more respected tradition in Europe, where it's not uncommon to see men frolicking poolside or by the coast in Speedos or tiny shorts. But in America most men just aren't that comfortable.

Although many men wear short shorts, I have to say it takes a certain man to pull them off. It takes a man with confidence and usually a fit physique. Obviously there are the few exceptions to the rule. Recently actor Julian McMahon was snapped on the Australian coast in a pair of tight turquoise swim trunks and he didn't look so bad. Still, he's not the only one to show some skin. We've gathered some photos of other celebrities that dare to wear short shorts. Image Source Photo Agency
If anyone can pull of the short shorts it's James Bond. Daniel Craig squeezed into a pair of black swim shorts while on vacation with girlfriend Satsuki Mitchell in St. Barts.

Image Source CelebritynGossip.com
Short shorts on the beach is fine, but when you carry them to everyday life, I'm sure that crosses some sort of line, especially when they're as short as Cristiano Ronaldo's. Still, I'm not sure what's worse, the length of the soccer star's shorts, the metallic sheen or his seriously over tanned legs. Can you say tanorexic? 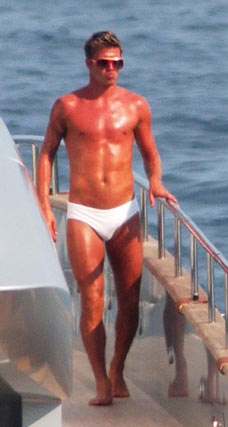 Image Source the UK's Daily Mail
What's up with European soccer stars and tiny shorts? Actually, David Beckham's choice of attire while cruising around the Italian coast is probably best described as a Speedo. And although he does make Speedos look good, someone should tell him to layer on the sunscreen. You're looking a little burnt Becks! Image Source Getty
Now for the king of short shorts, Richard Simmons. He might not have the good lucks or chiseled bodies of our other celebs, but he definitely has the confidence. More importantly, Simmons has been wearing tiny workout shorts for years. In fact, I'm pretty sure they're the only style of pants or shorts he owns.
Do you think it's weird when male celebrities wear short shorts? Take the poll here.