21 Things You Don't Know About the Spice Girls

In honor of the 20th anniversary of the girl group (and crazy platform heels). Spice up your life.
Spice Girls

You probably thought you were the biggest, baddest Spice Girls fan of all time back in 1997 (when you were in first grade), but there's more to these gals than insanely high platforms and knowing every word to "Wannabe." Really.

And now that it's been 20 years since Mel B, Mel C, Victoria, Geri, and Emma banded together in the name of girl power, it's time to catch up on your Spice Girls fun facts. After tearing through this, you'll be able to take Emma Stone head-on in a Spice Girls trivia night. Promise.

1. They didn't pick their own nicknames.

We all have Top of the Pops magazine to thank for coming up with Sporty, Baby, Ginger, Scary, and Posh Spice. In 1996, the British magazine gave them the nicknames and they stuck.

She skipped the first audition because her face got sunburned on a ski trip in Spain. You can't show up to a pop star audition with a red face, you know.

Luckily, she got a second shot and won the audition panel over with her charm. Apparently when asked her age, she told them: "I'm as old as you want me to be. I'll be 10 with big boobs if you want."

3. They were called Touch at first.

When the gals first got together, they weren't the Spice Girls. Instead, they were called Touch and changed the name after a song written for them called "Sugar and Spice."

4. Emma was the last to join the group.

She replaced another gal before they made it big.

5. Geri was the first to leave the group.

It's Posh Spice who isn't into a big reunion nowadays, but back in 1998 it was Geri who called it quits and made headlines around the globe.

6. The "Wannabe" music video was overplayed.

It was shown on the British TV station The Box 10 times a day at its peak.

7. Nelson Mandela gave them a shout-out.

8. Geri's Union Jack dress made a fortune at auction.

The dress from the 1997 BRIT Awards sold for an impressive $68,000 at a Hard Rock Cafe auction. It was the most expensive piece of pop star clothing ever sold back in 2007. (The garment also has its own Wikipedia page.) You can also buy a replica on Amazon for all of your Halloween needs.

9.  They were made into a fast food gimmick.

Do you remember Jack in the Box's Spicy Crispy Chicks?

10. Spiceworld: The Movie was nominated for 7 Razzies.

But it made over $100 million, so the gals got the last laugh. They collectively won the Razzie for Worst Actress though. Go team. 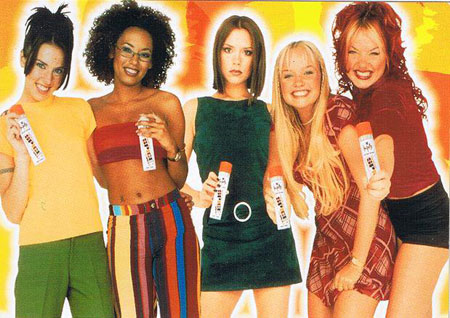 Spice up your pits.
Impulse

11. There was a Spice Girls deodorant.

"Impulse Spice" was made by Impulse to refresh your pits. They had tons of other endorsements — like 10 types of Cadbury chocolate bars.

It's a little shocking considering they're the most successful all-girl group in history and have sold 80 million records worldwide.

She wanted to be called "Melanie G" after marrying dancer Jimmy Gulzar while the gals were on their Spiceworld tour. It didn't really stick though. The marriage didn't last, either. They divorced in 2000 and went through a nasty custody battle over their daughter.

Before making it big with the band, she starred on TV here and there. She was offered a job playing a prostitute on the BBC show To Play the King, but turned it down to maintain her wholesome image. Good thing.

15. Victoria and Emma are godmother's to Geri's daughter.

Geri's daughter Bluebell Madonna has the coolest godmothers around. She was born in 2006 and is probably just now appreciating how awesome this really is.

Come on, you definitely didn't remember it was Victoria Adams before she became Mrs. Beckham in 1998.

17. The "Wannabe" music video was shot in one take.

And it was freezing cold inside the Midland Grand Hotel in London where they filmed it. Virgin's execs hated the finished product, but the gals refused to shoot another video. It went on to win a MTV VMA in 1997.

18. Emma recorded a song for the Pokemon movie.

She performed "(Hey You) Free Up Your Mind" for the film Pokémon: The First Movie in 1998.

19. Mel B and Victoria's first children are 13 days apart.

20. Victoria is the only member of the band who didn't have a No. 1 hit in the UK as a solo artist.

She did try a solo career and was working on a hip-hop album, of all things, after the group split. But then she was too busy being Mrs. David Beckham and designing clothes to bother with that anymore.

The social networking platform definitely wasn't around during their big brush with fame in the '90s, but now the gals keep their fans informed (and entertained) on Twitter. Follow the gals and never miss a second of Spice Girls: